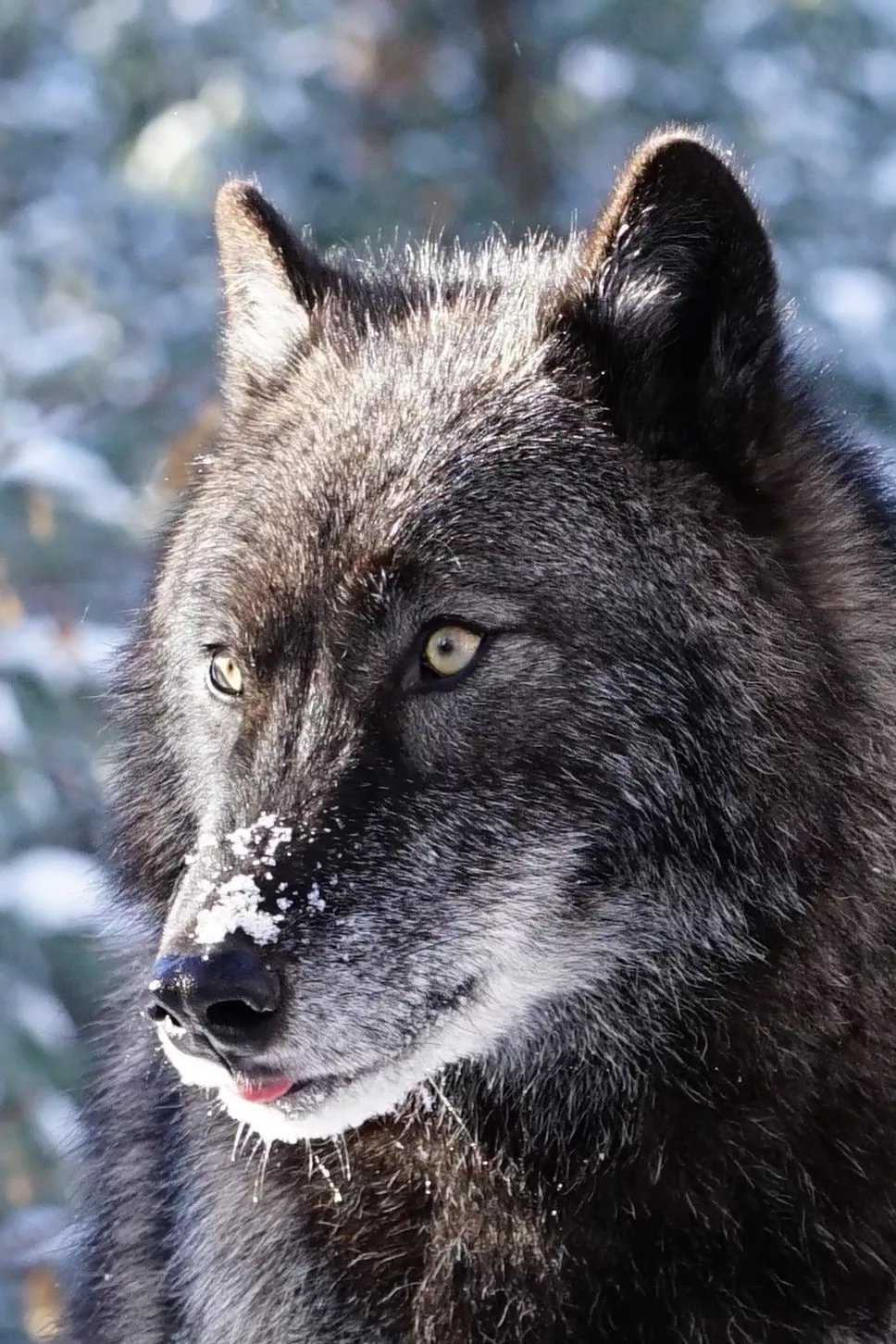 Ashima’s story starts like so many captive-born wolf dogs. Originally named Storm, she was born to a backyard breeder on April 11, 2017. As many wolf dog breeders mistakenly believe that wolves, like birds, imprint when their eyes first open, Storm was sold to a young couple at just three weeks of age. With few instructions on how to care appropriately for a young wolf, the couple was unprepared for dealing with Storm’s rapid development. During the next six weeks, Storm grew into an energetic, possessive puppy who would harass the couple’s three-year-old German Shepard and guard her toys obsessively. When they tried to contact the breeder for help with the puppy’s behavioral issues, the breeder hung up on them and blocked their phone number.

Through a combination of unfortunate circumstances and malnutrition, Storm’s right femur was badly broken at just nine weeks of age. The young couple brought her to their vet, but when the extent of the damage was discovered, they knew they would not be able to afford the surgery. Warned by the vet that most wolf dogs surrendered to rescues or shelters are killed, they contacted a local no-kill dog rescue to see if they would be willing to take in a “Husky-mix” puppy. The rescue agreed, and Storm was transferred to another veterinary clinic for emergency corrective surgery.

Shortly afterward, the couple contacted W.O.L.F. about Storm. After speaking with her original owners, seeing pictures, and hearing her story, W.O.L.F. knew she was a high-content wolf dog. W.O.L.F. staff discussed the situation and decided to give one of the two spaces available at the Sanctuary to Storm. W.O.L.F. conferred with the dog rescue, and it was agreed that she was more appropriately placed with W.O.L.F.  After W.O.L.F. picked up Storm from the vet, there were concerns with the appearance of the surgery site, and staff sought a second opinion from an orthopedic surgeon.

Unfortunately, the X-rays showed that the repair work done on Storm’s leg—a metal rod running the length of her femur with a wire wrap around the break site–was not the most effective repair technique for this type of fracture. The orthopedic surgeon thought the procedure could lead to a stunted and deformed leg as Storm grew into adulthood. At the very least, the rod extruding from her upper thigh posed a high probability of bone infection. According to the orthopedic veterinarian, her best chance for a having a functional leg would be to have a second surgery to stabilize what had already been done. Even then, there was still a possibility that additional surgeries would be needed later in life to lengthen the leg so Storm would be able to walk normally.

Because of her physical condition and the potential for complications and infections, Storm was not in a position to go immediately to the Sanctuary. Unfortunately, for these same reasons, Storm was not allowed to be around other wolves or dogs until fully healed. Instead, it was decided that she would be cared for by staff and volunteers at an offsite location until her leg healed completely. Much to staff’s delight and frustration, Storm was not at all impeded by having only three good legs, and she was up and running in what seemed like no time.

Despite attempts to follow doctor’s orders to keep Storm “calm and contained,” she showed just how “wolf-y” she was, climbing, crawling, running, jumping, and CHEWING. In fact, she was so skilled at attempting to climb over her containment gate that W.O.L.F. was inspired to change Storm’s name to Ashima, after Ashima Shiraishi who, at sixteen years of age, was one of the world’s best female rock climbers (go girl!). The name also means “without boundaries,” which is fitting for the little wolf’s personality.

In June 2017, Ashima had her second surgery at Colorado State University School of Veterinary Teaching Hospital. Luckily, she had grown enough that the surgeons were able to repair her leg and remove the metal rod and wires.  The new device she received was internal and would not need to be removed as she grew. In addition, Ashima was given two stem cell injections to aid further in her recovery.

As the summer progressed, Ashima decided she was most content outside and spent most of her days (and nights) in the great outdoors.  In order to care for the little wolf, her puppy-sitters spent their time backyard camping.  Thank goodness it was summer!

As summer slowly changed to fall, the orthopedic team at the CSU Veterinary Teaching Hospital took x-rays of her leg.  Her joints were strong and flexible, and her legs were growing at the same rate.  Ashima was finally ready to join the animals at the Sanctuary.  She was placed with the exuberant wolf dog Spartacus, who had boundless energy and could keep up with the wolf pup now known as the “wild child.”

The match has worked extraordinarily well. Ashima began attending educational programs with Spartacus, who was an excellent ambassador wolf and taught Ashima the ropes. They went on many educational programs together, and Ashima was a natural at understanding how to moderate her energy and behavior when in public. However, as she matured, she decided that she was no longer interested in going for car rides, which ended her time as an ambassador animal. Being the dominant and demanding individual that she is, she also forced Spartacus into retirement, as she was unwilling to allow him to leave her.

While she no longer leaves the Sanctuary, Ashima continues to be a prankster and a “wild child.”  Spartacus keeps up with her youthful energy, but he often has a look of relief when humans come to give him a break from his playmate duties. Ashima has grown into a healthy and happy wolf dog.  Her fate could have been so different if she had not been placed at W.O.L.F., where we have the ability to provide for her medical and social needs for the rest of her life.