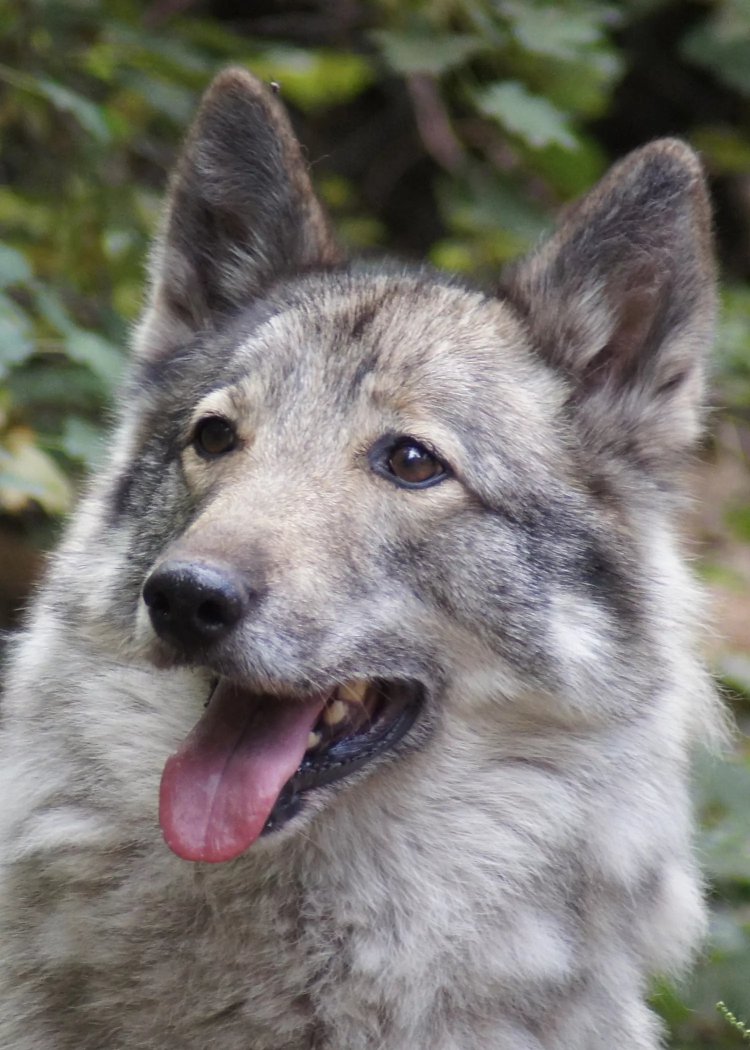 Ariel was rescued in Ohio after roaming the woods nearby her rescuer’s home with two other dogs. Clearly not like the other dogs, wolf dog Ariel was very shy and terrified of people and avoided all contact if possible. After the other two dogs were adopted, her rescuer tried to work with Ariel to take care of her including grooming, socialization and trips to the veterinarian. Although she did not show signs of aggression, she remained very frightened and instead of considering what was recommended, euthanasia, her rescuer adopted her and placed her in a boarding facility, where she would have the company of other dogs, with the hopes of finding sanctuary placement.

Months of efforts turned into years as sanctuaries were either full or Ariel was too low content or too high content, but her rescuer did not give up and continued to try socialization through frequent visits. As discouragement grew, things began to change. A friend offered to help and soon found out about W.O.L.F. Sanctuary. W.O.L.F. had space and Ariel would finally have a forever home at the Sanctuary. Ariel was driven from Ohio to Colorado in a non-stop trip that would get Ariel safely to the Sanctuary in less than 24 hours.

Ariel was nervous and shy around people, but once she was introduced to her new companion, Thor, she spent less time hiding and more time watching. She watched curiously as her caretakers socialized with Thor. She enjoyed Thor’s company and could often be seen walking over to him to make sure he was okay once humans left the enclosure. They were often seen lying side by side or following each other around. At meal times, Ariel approached the front of her enclosure and did a little happy dance in anticipation of her food. When Thor passed away in November 2016, Ariel was devastated. She had come to rely on Thor as her companion and protector. She hid herself away from the eyes of her humans and spent many hours in her den. W.O.L.F. gave Ariel the time she needed to grieve for Thor and then placed the gentle wolf dog Sigmund in her enclosure. The two never formed a strong bond, but Sigmund brought companionship and comfort to Ariel. When Sigmund died in May, 2017, Ariel was again given time to grieve for her lost companion. Her neighbor Pax was also alone and W.O.L.F. made the decision to put the two together. Pax is a very social wolf dog and loves the company of people. He is always at the fence in order to visit and watch the Sanctuary comings and goings. Periodically he climbs the mountain enclosure to check on Ariel to make sure she is safe. He may spend time sleeping in the sun near her. But Pax is loathe to give up his spot at the front of the enclosure where he serves as the official Sanctuary greeter. Ariel has adjusted quite well to Pax. She is happy to have a companion in the enclosure, and she is coming down to the front of the enclosure at meal times. She knows Pax is a chow hound so they are separated at meal times. Ariel will always be a shy and somewhat reclusive wolf dog who does not care for human contact. W.O.L.F. respects this beautiful girl and will continue to care for her and love her for the rest of her days.
We have always tried to save the limited space at the sanctuary for high-content animals that cannot be placed anywhere else. Isabeau fit this description exactly. When Isabeau arrived, blood tests revealed that Isabeau was under-nourished, dehydrated, and had signs of kidney disease. She was immediately treated for dehydration and the kidney problems and put on a healthy diet. Maybe that was why cheese and butter became the simplest way to coax her into her enclosure.