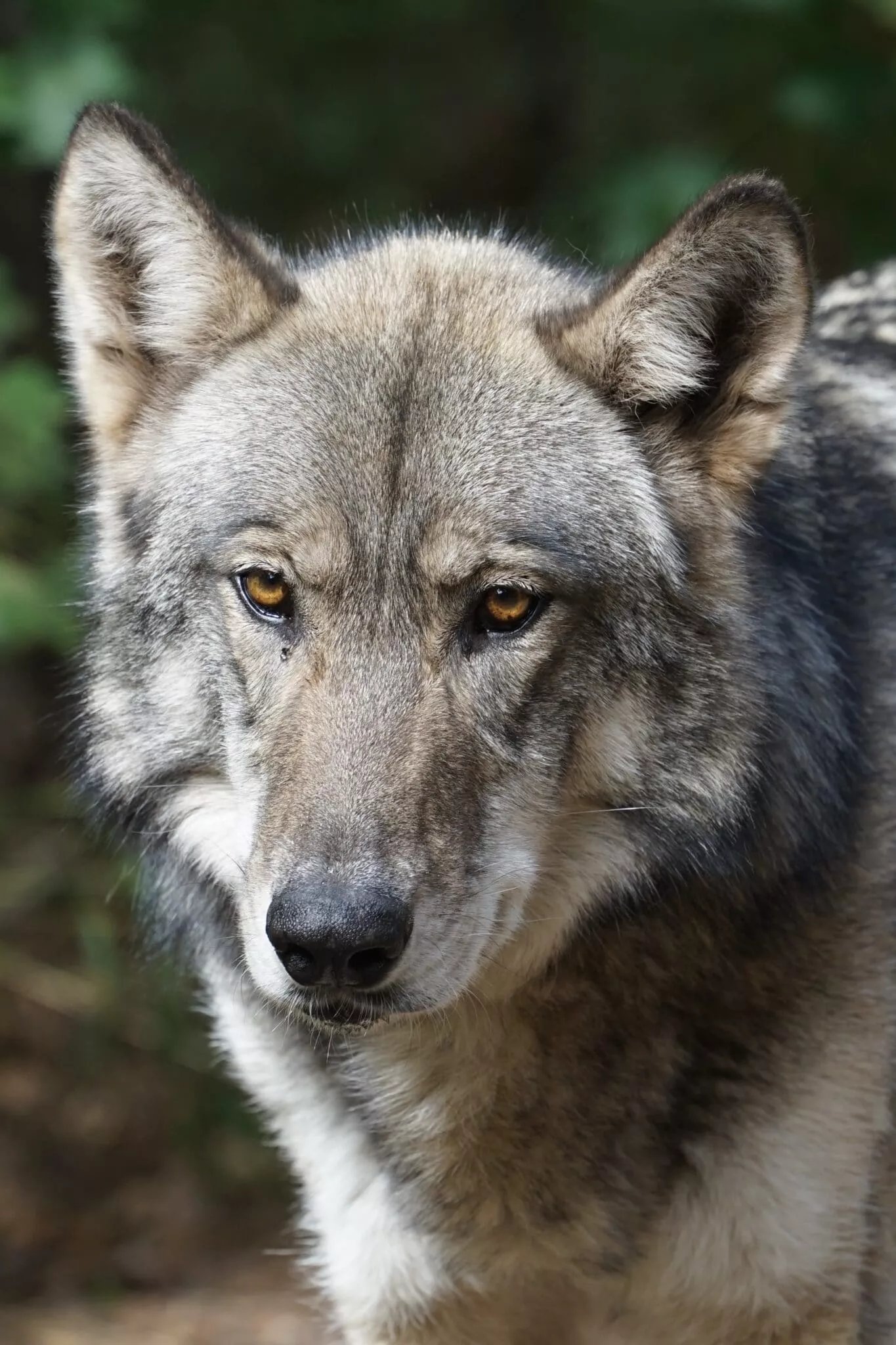 Amaris is a grey wolf dog who was rescued along with her sister Indigo from Washington State. Her name was originally “Moon,” but staff decided to spice it up and renamed her “Amaris,” which means “child of the moon.” Her rescue, along with Indigo’s, was a race against time. With the help of Wolf Haven International and W.O.L.F., the two sisters won that race.

The two wolf dogs were acquired by their owner from a breeder in the Frasier River Valley of British Columbia, Canada. Because the owner was fearful that the wolves would be discovered, she kept them isolated in a ten-foot by twelve-foot enclosure with a concrete floor, closed sides, and a roof. They were not well-socialized with humans or other animals. When the owner and her husband fell on hard times, the wolves were rehomed to a remote dog rescue in rural Washington.

The two sisters were able to escape repeatedly from their enclosure at the dog rescue by digging their way to freedom. The girls remained in the area and came back to the enclosure for feeding on a regular basis. While free, they roamed the area and howled, which disturbed the neighbors, who contacted Washington Fish and Wildlife. Because the area was home to a group of wild wolves, Fish and Wildlife officers feared the sisters would breed with the wild wolves and pollute the genetics of the recovering wolf population.

On July 12, 2016 at 1:00 in the afternoon, W.O.L.F. received an urgent request for help from our rescue partner Wolf Haven International, a sanctuary in Washington that rescues wolves and wolf dogs and participates in species restoration. Washington Game and Fish intended to trap the sisters and kill them that day unless a sanctuary stepped up to rescue them. The deadline for finding a sanctuary home was 4:00 PM. Since Wolf Haven International did not have space for the wolves, they contacted W.O.L.F. W.O.L.F.’s Executive Director and the Director of Animal Care conferred and immediately agreed to help. The sisters were trapped that day and were turned over to Wolf Haven staff, who rendezvoused with the W.O.L.F. rescue team in Idaho. The transfer went smoothly, and the sisters were driven directly to Wellington Veterinary Clinic. They arrived in Colorado on July 14, and Dr. Teva Stone performed health checks, vaccinations, and spay surgeries. By 8:00 that evening, the girls arrived at the Sanctuary. They were placed in a large enclosure with a large gated catch-up area where they could be easily observed.

The sisters immediately began exploring their surroundings and looking for vulnerabilities in the fencing. Amaris was a digger, and Indigo was a climber. They both started to work looking for a way out. Indigo managed to climb the fence and wedge herself in the safety area between her enclosure and the next enclosure. Amaris was able to dig nearly into the next enclosure. Staff watched the ingenious escape artists and calmly and quickly went about reinforcing fencing and making the enclosure escape-proof for the sisters.

Since their early escape attempts, Indigo and Amaris seem to have relaxed, and they are enjoying a life where they have regular food, interesting wolf neighbors, and lots of space to run and roam. The sisters enjoy watching the staff and volunteers do chores, and they know when it is feeding time. The sisters are finally safe and in their forever home.